The Widow's Wine Grenade is a piece of equipment in Call of Duty: Black Ops III. Upon purchasing the Perk-a-Cola Widow's Wine, the player's normal grenades will be replaced with these grenades. They take on a similar appearance to Semtex and stick to surfaces. In addition to the normal explosion, any zombies not killed within the radius shall be entangled in webs, slowing them down for a short time. It is required when obtaining the free Mega GobbleGum in Shadows of Evil. They will also explode while in the player's inventory when the player is hit by a zombie making it easier to survive in difficult situations. Some zombies that are entangled by webs will drop a blue power-up with a spider icon. When the player picks up this power-up, they will be awarded with another Widow's Wine Grenade. In this way the player can obtain two, three or four Widow's Wine Grenade while only using one. 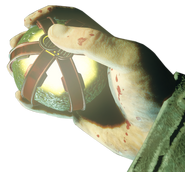 The Widow's Wine Grenade before throwing 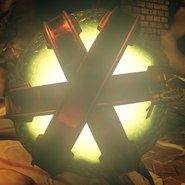 The explosion of the Widow's Wine Grenade
Add a photo to this gallery
Retrieved from "https://callofduty.fandom.com/wiki/Widow%27s_Wine_Grenade?oldid=2471523"
Community content is available under CC-BY-SA unless otherwise noted.