The Widowmaker (referred to as CheyTac in the game files) is a burst fire, bolt action sniper rifle appearing in Call of Duty: Infinite Warfare. It resembles the Intervention from previous games except the barrel is also covered by the lightweight mold, and it fires in two-round burst mode before cycling the bolt.

The Widowmaker is unlocked at level 26.

The March 10th, 2017 patch decreased the delay between shots within the burst, allowing for a more reliable long range capability of the Widowmaker.[1]

The Widowmaker can be obtained from the Magic Wheel in Zombies in Spaceland. Unlike its multiplayer variant, it has a 10 round magazine. It is available for customization at level 33.

When Pack-a-Punched, the Widowmaker becomes the Shooting Star, containing a 15 round magazine, higher damage and 90 rounds in reserve.

The Widowmaker in first person 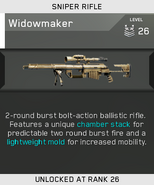 The Widowmaker being unlocked in multiplayer