"If your calculations are correct, we will have immediately achieved more than those Nazi bastards ever did."
— Peck talking with Aleksandra Valentina

Born in 1940, Peck graduated with a Doctorate in Theoretical Physics at only 20. He became Program Manager in the Department of Defense and was in charge of the Directed Energy Weapon laboratories. With an IQ of 179, Peck was exceptionally intelligent but was hard to work with and displayed a lack of empathy which bordered on an undiagnosed sociopathy disorder which led him to be passed on for promotion several times.

He was deemed an excellent gain for the Soviet Union by Doctor Aleksandra Valentina of the Omega Group who saw him as an exemplary candidate for their Exoscientific Phenomena Research Lead. 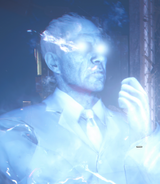 Peck as seen in a Spectral Vision in Die Maschine.

Peck paces nervously as he waits for backup.

Peck is annoyed by the statement, asking what more she wants of him.

Peck sarcastically states that they'll see what the Colonel thinks of this...

...which proves to be an extremely poor choice of words.

Colonel Kravchenko asks Peck if he really wants to know what he thinks.

Peck is backed into a corner by Colonel Lev Kravchenko, after being asked which is his "better eye".
Community content is available under CC-BY-SA unless otherwise noted.