"Welcome to the bloody First. You're a long way from Texas, farmboy."
— William Pierson

Technical Sergeant William Pierson is the tritagonist in Call of Duty: WWII, with an active skill to highlight enemies.

"My orders were to fall back. But I couldn't just leave them. I told my men we were gonna hold this pass until reinforcements got here but they never came. They never came."
— Pierson to Daniels.

Pierson joined the United States Army and quickly rose through the ranks, meeting Joseph Turner in 1939, during the beginning of World War II. Pierson participated in the Battle of Kasserine Pass on February 1943 alongside Turner and Davis. When he was ordered to retreat, he refused due to some of his men being trapped at the pass. Pierson ordered his men to hold their ground until reinforcements arrived, but no one came, resulting in a slaughter of many of his men. Because of his actions, he was given an Article 15 and a demotion to the rank of Technical Sergeant by Turner himself.

On June 6th, 1944, he was present during the invasion of Normandy, being placed on a Higgins boat with Turner and several other soldiers, such as Frank Aiello, Drew Stiles, Robert Zussman and Ronald "Red" Daniels. After landing on the beach, Pierson, along with other American forces, managed to push their way through the German defenses, clearing out several bunkers overlooking the beach before destroying an anti-aircraft gun at a farm just up the road from the beach. At the end of it all, he welcomes Daniels into the 1st Infantry Division, telling him that he's a long way from his home in Texas and calling him "farmboy".

"You see, we're in a whole new world Daniels. My world. And you can bet your ass that I will not shrink or waver from my responsibilities in any way."
— Pierson to Daniels after taking leadership of the squad.

"You think I wanted any of this? We're cogs in a machine, Joseph. We start going our own way, the whole thing breaks down. When did you forget that?"
— Pierson to Turner in "Hill 493".

The loss of his men and rank changed Pierson from a loyal leader to an embittered shell of his former self. During the events of Call of Duty WW2, Pierson is cold, distant, strict and callous towards everyone he meets. He is greatly disliked by many soldiers, who find him to be apathetic and unlikeable in general. The only care he shows for anyone is briefly shown in "Operation Cobra", asking Zussman if his wounds healed, showing that he doesn't want him to suffer the same fate his men did in Kasserine.

When it came to the battlefield, Pierson was known to be persistent and dedicated to defeating the Germans. Perez states that he will never give up in battle, this is noticeable when he orders the planes in the Bulge to fire on them. In addition, he wanted to make Daniels' platoon a model unit to wipe his slate clean, only doing so in a aggressive manner.

After the loss of Turner, Pierson became more ruthless and violent, telling Daniels that they were in "his world" and expects the best they can bring. Turner's death affected him deeply, having loss someone whom he considered a friend. Beginning to drink his sorrows away, he showed apathy to his men, an example being in "The Battle of the Bulge" when Daniels asks for any blankets. After his confrontation with Daniels in "The Rhine", Pierson becomes mellowed and more respected, determined to find Zussman, even going so far as to go to each German labor camp to find him.

During gameplay, his ability is to spot enemies, marking them with a glowing white outline and making them easier to see.

"Oh you think you're special, huh? The Krauts are gonna eat your lunch"
— Pierson to Daniels and Zussman in the opening.

"Hey. Y'know a wound like this takes eight weeks to heal."
— Pierson on Zussman's wound in "Operation Cobra".

"You got guts, private. I just don't wanna see'em."
— Pierson to Zussman.

"I served six years with that man. Six"
— Pierson on Turner after the latter's death. 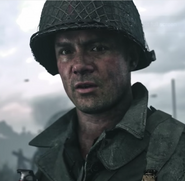 Pierson's dossier (top right) along with Zussman and Turner's.

Pierson in a promotional image. 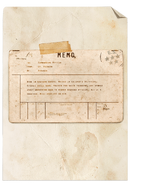 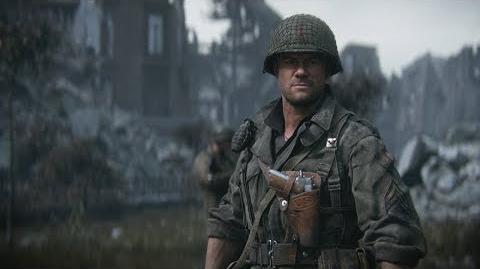 Retrieved from "https://callofduty.fandom.com/wiki/William_Pierson?oldid=2435883"
Community content is available under CC-BY-SA unless otherwise noted.