"What is this? Is like old friend "Ray" went to North Pole. *gasp* Christmas Ray!"
— Nikolai Belinski

It fires a blizzard of ice that affects Zombies. After a predetermined amount of hits (it takes more on later rounds, and it takes less with the Pack-a-Punched version), a zombie begins to show signs of freezing such as water vapor in the air and slowing down. The shot also causes some damage to the zombie. If the zombie is hit again while slowed, it is stopped in its tracks and is encased in an ice cube. When frozen, the zombie is immediately killed. If left for a few seconds, shot, or walked into, the ice cube will shatter. However, when it reaches around mid twenty, then the Winter's Howl becomes extremely inefficient in killing zombies, requiring multiple shots to freeze.

In Black Ops, the normal version of the Winter's Howl holds six rounds and has 24 spare rounds. It is possible for two players to have a Winter's Howl through a Fire Sale. Neither the Winter's Howl nor its Pack-a-Punched counterpart will freeze the Pentagon Thief; he will only be slowed down and take damage.

When Pack-a-Punched in either game, it becomes Winter's Fury, and gains nine rounds per magazine with 36 spare rounds, with a longer freeze time and more power.

The Winter's Howl, and the Winter's Fury are best used as support or emergency weapons. The range is very long, but there is a small delay before the shot reaches its target, similar to the Ray Gun and explosive weapons. The effect is also vision-blocking, and can be detrimental to the aim of teammates. As rounds progress it takes more shots to freeze zombies. By Round 50, it can take up to two magazines to completely freeze one zombie. 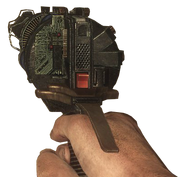 The Winter's Howl in first-person. 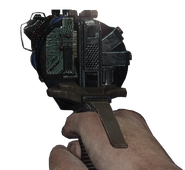 Effects of the Winter's Howl.

An early build of the Winter's Howl.

The Winter's Howl in Black Ops 4 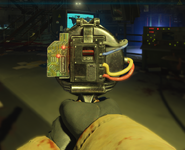 A blast from the Winter's Howl.

A Zombie frozen by the Winter's Howl