"When hit by a melee attack generate a frost explosion that will freeze or slow enemies nearby. Player can store two charges."
— Description

Winter's Wail is a perk introduced in Call of Duty: Black Ops 4. It comes in the form of Perk-a-Cola in Blood of the Dead, Classified, Alpha Omega, and Tag der Toten, and as a Perk Vapor in Voyage of Despair, IX, Dead of the Night, and Ancient Evil respectively.

Winter's Wail, when purchased, will allow the player to generate a frost explosion that freezes or slows enemies within the proximity of the explosion when damaged by an enemy's melee attack. The player will be able to store two charges.

When assigned to Odin/Tonic and the player obtains the rest of their perks, the Modifier granted will make it so that frost explosions trigger a slowing field around the player for a limited time. It will also grant the player an additional charge. Works similar to Widow's Wine . 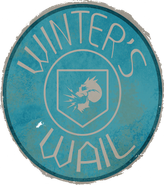