"Wolverines!" is the sixth campaign mission of Call of Duty: Modern Warfare 2 and Call of Duty: Modern Warfare 2 Campaign Remastered. The mission marks the beginning of Act 2 in the campaign. Although the Task Force 141 successfully recovered the ACS module, they were too late. With the hacked module, the Russians declared war by launching a surprise invasion of the United States as revenge for the deaths of many civilians at the hands of an American. This invasion catches the Americans completely off guard. With little time to organize a strategy, Rangers from the 1st Battalion, 75th Ranger Regiment immediately gear up to secure a VIP, codename: Raptor.

In response to an apparent United States-supported terrorist attack on Zakhaev International Airport, the Russian government has declared war on the United States, seeking revenge for the deaths of hundreds of innocent civilians. Using a duplicate of the ACS module that Task Force 141 had recovered earlier in Kazakhstan, the Russian military confuses the early-warning systems of NORAD with a massive phantom aerial attack on the West Coast of the United States. This allows the real Russian strike force to sneak in on the East Coast undetected. Russian fighter jets sweep in, allowing many cargo planes to airdrop troops, armor and equipment for an attack on American soil. The U.S. military is caught off-guard, and scrambles to repel the invaders.

Taking on the perspective of the 1st Battalion, 75th Ranger Regiment, Ramirez, Dunn, Foley and Morgan start off in a humvee driving down the suburbs of Northern Virginia. Suddenly, a BTR appears from behind some tall stances and fires at them. Everyone gets out and the Rangers in the lead vehicle are killed.

They run behind the houses and stay parallel to the street as the BTR continues down its path, destroying the homes with its cannon. It eventually runs into a barricade and spots the Rangers, who dispatch the troops that disembark and use smoke grenades to run past it. They clear Russian forces in brutal close-quarters fighting and eventually reach Nate's Restaurant and are given an update by Pvt. Wells, who inform them that the HVI, "Raptor", is unconscious and inside the restaurant's meat locker for protection.

The Rangers soon spot a convoy of military trucks coming in from Taco To Go, using smoke as a cover. The squad takes thermal M14 EBRs to pick off most of the enemy soldiers, just as another convoy appears from CBR Financial. Some enemy soldiers manage to get through the intense fire and onto the restaurant's rooftop, but are all eliminated by the Rangers.

Just as it seems that the coast is clear, a UAV fires Predator Missiles on the restaurant. Foley sends Ramirez, Dunn and a few other rangers to eliminate the UAV operator who has nestled himself in the diner across the restaurant. They are able to sneak through two BTRs that had arrived during the fight and take control of the UAV, using it to destroy the BTRs and additional enemy reinforcements. Enemy fast movers then bomb the restaurant, prompting Foley to move Raptor and has the Burger Town cleared of hostiles.

More enemy reinforcements arrive, but are cleared by the Rangers. The attack culminates with the presence of two Mi-28 Havocs, which Ramirez shoots down with Stinger missiles. With the area now clear of hostiles, a friendly convoy appears and the Rangers exfil out to Arcadia to save and evacuate civilians caught in the fighting.

The U.S. military convoy at the end of the level.

Concept art for the mission.

) - Obtained by completing "Wolverines!" on any difficulty.

NOVA is a gas station that seems to be where Russian troops are dropped by a truck. There are many vehicles still out front, showing that the evacuation of this town was very sudden. The Russians will use cars and dumpsters for cover but grenades will flush them out. There is a bathroom and the level's first Intel is on the checkout counter.

Keating is another gas station, located near where the U.S. military convoy picks the player up. It should also be noted that the 'eat' part of Keating is underlined, probably meaning that it operates a restaurant in the gas station.

CRB Financial is a small bank to the north of the strip mall. It is one of the main points where Russian paratroopers regroup. When Hunter 2-1 moves past Nova Star, they head for the wreck of Raptor's Pave Low and take cover behind a cop car. They will shoot at Russians inside CRB while getting a SitRep from Pvt. Wells, who seems to be in charge before Sgt. Foley arrives. There would be no true reason for the player to enter CRB Financial, unless gathering the level's Intel (Laptop 2 is underneath the cubicle for Online Banking) or trying to oust Russian forces. However, these are difficult considering the Russian soldiers will hide in the cubicles, then ambush and kill the player as he/she approaches.

When the player must defend against a wave of Russian enemies from beyond the bank using their Sentry Gun and possibly an M14 EBR Thermal, it is considerably harder to kill every single Russian than from when they were attacking from the parking lot, because there is much more cover available for them now.

Nate's Sports Bar and Grill, referred to as Nate's Restaurant by the Rangers, is a sports bar at the center of the strip mall. It is the closest unoccupied building to Raptor's crash site, so the Rangers move him to a hallway in the back. a few Rangers guard him, while others including Pvt. Ramirez and Foley go to the roof to defend from Russian infantry using sniper rifles, claymores, and an M5 Sentry Gun. The building is later destroyed by AGMs fired from a UAV and a MiG strike. 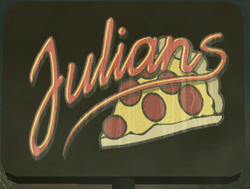 Julian's Pizza is a pizza parlor on the corner of the main road and the starting convoy road. Julian's seems to be the only restaurant that sustains no damage, as no fighting takes place there and the player cannot go inside.

Taco To Go is a taco restaurant to the south of the town. It also becomes a main regrouping point for any Russian infantry brought in by trucks to the south, who haven't been killed by the Sentry Gun. It is yet another place that the player is not required to enter, except for the reason of getting the Intel, there is a hole in the wall caused by some sort of munition that the player can crawl through. Intel 3 is on one of the tables.

Joe's Diner is a typical diner in between Nova Star and Julian's Pizza. The player must first head inside to kill a UAV operator, as well as the Russian infantry protecting him. Inside, the player can find many laid out weapons. These weapons include the M14 EBR Thermal, M240 ACOG sight, AK-47 Grenadier, and FIM-92 Stinger. The player is called back to Nate's after eliminating the operator, and avoids being bombed by enemy fast movers. Once Raptor is moved to Burger Town, the diner becomes another Russian stronghold, as there will be many foot mobiles who group up inside the diner from the back door, which they seem to have no trouble opening.

Burger Town is a fast-food restaurant to the south of Nate's in the strip mall. When the trucks drop off Russians on the southernmost road, they use it as an infantry stronghold to combat against Nate's Restaurant. After killing the UAV operator, the player and several other Rangers go back toward Nate's, barely avoiding death when several fighter bombers destroy Nate's in an attempt to kill Raptor. Now, the only safe place for Raptor is the effectively-bulletproof meat locker in Burger Town. The player and their squad must clear out Burger Town of its substantial Russian opposition, then take Raptor inside. The only laid out firearm is an RPG-7 in the kitchen, which can be used to take down the BTR at beginning of the mission and the enemy Mi-28 Havocs at the end, providing the copters fly close and stay in the same place long enough. After defending Burger Town with the enemy's UAV, the player must head back to the diner and Nate's to gather Stingers which can take out the ensuing attack helicopters.