The Wunderbuss is a geistkraft weapon that appears in the Call of Duty: WWII Nazi Zombies map The Shadowed Throne. The weapon appears to be a modified blunderbuss configured with advanced Geistkraft circuitry and customization.

The Wunderbuss is one of Heinz Richter's Geistkraft weapon prototypes that was stolen by the Smuggler in order to sell it on the black market. During the Battle of Berlin, the weapon would remain locked away in the Smuggler's workshop unfinished due to the lack of parts needed to complete the weapon.

The Wunderbuss has two firing modes, each of which benefits the other. By shooting the gun normally, the player will send out a beam of concentrated Geistkraft energy. If the player "aims" down the sights, the weapon will launch out a single Geistbolt, which if stuck to any type of zombie, will siphon off the Geistkraft energy from within the zombie and transfer it into the Wunderbuss' beam ammo count, replenishing it slightly. However, while doing this process, the player's mobility will be decreased. After a few moments, the Geistbolt will drain enough energy up to the point of severely weakening the zombie. If applied to the same zombie multiple times, the zombie will eventually die from the Geistbolt's transfer.

The Wunderbuss plays a critical role within the map's main easter egg, as well as to unlock the Ubersprengen.

A completed Wunderbuss is also located within the Zeppelin during the battle against the Stadtjäger, being located to the right of the Resupply Package. It is first used to get into the Zeppelin by utilizing its energy to power up a Drop Pod, and is later used to weaken the Stadtjäger by shooting it during its final phase after it has shot itself with two of its own Geistbolts.

There are a total of two parts which are required to construct the Wunderbuss; the Battery and the Geistbolt.

The player must now use the radio on the Main Street to contact the Red Army. After doing so after tuning in the right frequency with the use of the frequency chart in the Church, the player must shoot the lock on a crate to the left of the main entrance to the museum. Meleeing or shooting the box will cause several flares to launch into the sky, alerting Straub and his Zeppelin. This will cause the Zeppelin to hover over the map and launch its anchors upon the map. This will also enable the player to create Gekochts by having the Zeppelin fire its beam of energy onto a normal zombie. When a Gekocht is created, the player must melee it to death. Upon doing so, it will give the player the Geistbolt.

In order to exit the Wunderbuss' workshop, the player must simply fire a Geistkraft beam into the control panel, overloading the device and re-opening the gates. 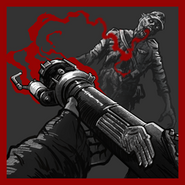