"Haha, I FEEL LIKE BIG EAGLE!"
— Nikolai after landing from a Wundersphere

The Wundersphere is a utility in the Call of Duty: Black Ops III Zombies map Der Eisendrache. For the price of 500 points, the Wundersphere flings any player that stands on it towards the currently-activated Landing Pad, in a similar way to the Gravity Lifts from the map Moon. It takes a prominent role in one of the upgrading steps of the Fire Bow, and is used to obtain a part for the Ragnarok DG-4.

For the price of 500 points, the Wundersphere hurtles any player that stands on it towards the currently-activated Landing Pad. Players can tell whether a landing pad is active by it having a blue glow around it. After using a Wundersphere pad, there is a cool-down time period during which the used sphere is not active.

There are total of four Wunderspheres pads, each with its respective landing pad:

Upon activating a Wunderspheres pad, every zombie that steps on it will die as it is flung by the device. 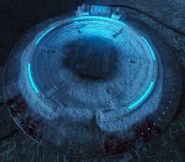 A landing pad signaling that a player will land on it.

A landing pad on cooldown.