Call of Duty Wiki
Register
Don't have an account?
Sign In
Advertisement
in: Call of Duty: Black Ops 4 Wonder Weapons

For the second version of the weapon, see Wunderwaffe DG-2.

The Wunderwaffe DG-Scharfschütze (German for: "Wonder Weapon DG-Sniper") is a Wonder Weapon featured in the Zombies map Tag Der Toten from Call of Duty: Black Ops 4.

The name, design and how to use is very similar to the Wunderwaffe DG-2. Major differences include a Sniper Scope, a higher ammo capacity, a mag-fed reload, and a slightly lower range, necessitating zombies to be closer together in order to score chain kills. Its power is amplified when landing headshots on zombies, killing faster as well as having bigger chain effect for killing more zombies. The weapon can be obtained from the Mystery Box for 950 points, or for free as part of the main quest.

Once upgraded, the weapon becomes the Wunderwaffe DG-Funkenschütze. 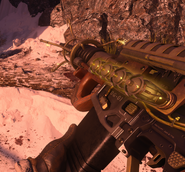 The blueprint for the Wunderwaffe created by Richtofen.