"A highly skilled member of a US Marine Corps Special Reaction Team, Bulldozer is a CQB and hostage rescue expert. Always first in the fight, Bulldozer strives to protect the defenseless and serves with distinction."
— In-game biography

Wyatt Jones, also known as Bulldozer, is an operator for the NATO faction featured in Call of Duty: Black Ops Cold War and Call of Duty: Warzone. Bulldozer was released on December 31st, 2020 during Season One as part of the "Tracer Pack: Bulldozer Operator Bundle".

Born on October 29, 1955, Wyatt Jones enlisted in the United States Marine Corps at the age of 18 and assisted in the evacuation of Saigon in 1975. Having served with distinction, Jones joined the Marine Corps Special Reaction team in 1978. [1]

On January 21, 1984, as part of Russell Adler's team, alongside Zeyna Ossou and Frank Woods, Jones infiltrated a mall in New Jersey after having learned of an incoming attack involving Nova 6 gas. They, however, were soon ambushed by forces led by Vikhor "Stitch" Kuzmin. As the team was overwhelmed, Adler was captured by Stitch.

On June 27, 1984, Jones joined Adler, Woods, Helen Park and Jabari Salah in securing a satellite crash site in Algeria. Adler, having been subject to Stitch's brainwashing methods, secretly recovers a data recorder from the crash site. 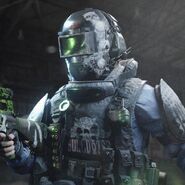 Bulldozer as an operator in Multiplayer.

Bulldozer and Adler's Team in The Pines.

Salah and Bulldozer after Adler runs out of cover.