The X-Eon (known as VR-AR46 in pre-release) is a fully-automatic energy assault rifle featured in Call of Duty: Infinite Warfare that was added in the March 28th, 2017 update. It appears to be a highly futuristic weapon, offering abilities such as tight hip spread, increased fire rate when aiming down sights, along with a tracker like sight that comes by default.

It is available for free for Season Pass holders, otherwise it can be unlocked via a challenge or a Supply Drop. However, bots will sometimes wield this weapon

Although it is not obtainable in the campaign, the weapon could already be seen before the March 28th update. A soldier is seen training with one in a virtual shooting range by the News Room and the door that leads to the bridge aboard the Retribution. It also can be seen in other various locations, such as Griff's armory.

The X-Eon bears a unique pop-up optic that can highlight enemies like the Thermal Scope. However, players with Cold Blooded and Hardwired can counter the optic's abilities. However, the optic on the Warsight variant of the X-Eon counters this, allowing the player to see other players that have Cold Blooded, Hardwired and even Active Camo on.

The weapon features an advanced recoil compensator that allows the weapon to have a tighter hipfire spread, meaning players are more likely to hit an enemy if hipfiring towards them. Another unique feature is that the fire rate increases when the player aims down the sight.

A downside to the X-Eon is its low starting ammo, where it gives the player a total of 90 shots. Because of its fire rate, it can easily run out of ammo if the player doesn't have Scavenger or collect ammo from an X-Eon on the ground. Because it is an energy weapon, it cannot have Extended Mags.

On September 9th, 2017, a newsletter was released from the QR-M5TR, detailing the character's process of moving the X-Eon from the QR-M5TR collection and into the Prototype Lab.[1]

The letter reads as follows;

The X-Eon in first person 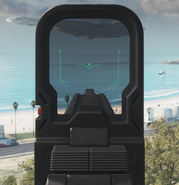 Aiming with the Warsight variant 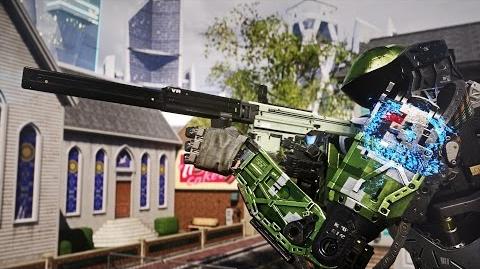