For other uses, see XM.

The XM-53 is a rocket launcher featured in Call of Duty: Black Ops III.

In the campaign, the standard XM-53 appears in every mission after Hypocenter as a pre-spawned weapon for destroying vehicles.

A variant, the XM-53 DF, can be selected in the player's custom classes (whereas the standard XM-53 cannot). The XM-53 DF can only be free-fired, or "dumb-fired" as the description states. The XM-53 is one of the many explosive weapons that can be used to destroy ASP battle tanks.

For getting kills for Master of Arms, the arena in front of the Coalescence entrance in Life is the best option. If the objective isn't completed after the ASP-ML is destroyed, infinite waves of Wraiths, Talon-MGs, and P.A.W.W.S. will spawn, providing an easy source of kills for the XM-53 until the desired kill count is reached.

Alternatively, one can take advantage of the inifnite spawn point during Provocation, Hypocenter or Rise and Fall.

In Provocation, before entering the 4th floor of Cloud Mountain, one can jump down to the first floor and repeatedly kill the 54i reinforcements.

In Hypocenter, one can take advantage of the infinite spawning detonating robots after destroying the third tower - this is the easiest method as non of the AI combatants in this area will use any weapons, and one can reduce the risk of losing progress.

During Rise and Fall, there is an infinite spawn point on the right side wall after destroying one of the two weak points with the Spike Launcher, the enemies can group up and take the player down quickly if they get careless.

The XM-53 is a launcher with two available rockets. It can be free-fired or locked onto enemy vehicles. A free-fired rocket flies straight for a short distance but will begin to veer off randomly over medium to long ranges.

While the XM-53 is an optimal choice for killing enemy players, the availability of only two rockets prevents it from destroying enemy scorestreaks that require more than two shots to destroy without having the player die or having Scavenger and resupplying ammo for it.

The XM-53 appears in the Zombies maps Shadows of Evil, The Giant, Der Eisendrache, Zetsubou No Shima, Gorod Krovi and Revelations where it can be obtained from the Mystery Box. It is best to use on hordes of zombies, as it can kill in 1 hit in the early rounds.

When upgraded via the Pack-a-Punch Machine, the XM-53 becomes the Heliacal Incandescence. It now has a magazine capacity of two rockets, and 20 rockets in reserve.

In Zetsubou No Shima, it is possible to obtain the XM-53 from the lowest grade reward pod, it is also required to destroy a web with this weapon as part of the Web of Defeat achievement/trophy.

The XM-53 in first-person 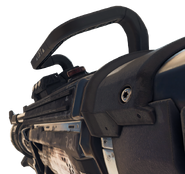 The XM-53 DF variant seen in campaign; note the lack of a lock-on sight

The Heliacal Incandescence in The Giant 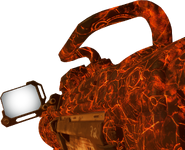 The Heliacal Incandescence in Shadows of Evil
Add a photo to this gallery
Retrieved from "https://callofduty.fandom.com/wiki/XM-53?oldid=2453918"
Community content is available under CC-BY-SA unless otherwise noted.