For other variants, see Commando (weapon) and M4 Carbine.

The XM4 is an assault rifle featured in Call of Duty: Black Ops Cold War.

It appears as the primary weapon in "Nowhere Left to Run" at the Trabzon Airport, in "Operation Red Circus" when eliminating Vadim Rudnik at a Soviet military base, and in "The Final Countdown" when assaulting the Solovetsky Monastery. In "Operation Chaos", an XM4 can be found in the gas station alongside other weapons. In "Ashes to Ashes", "Bell" wields an XM4 when betraying Adler and the team in Duga, but it's never used.

The XM4 can be brought into any map via Create-A-Class, at Loadout rarity and can be found at any rarity via the Mystery Box for 950 Essence. Within Die Maschine, It can be found in the Tunnel system leading to Project Endstation, opposite of the enterance to the facility as a Wall Gun costing 1,750 Essence coming with 3 attachments and at Uncommon Rarity. When upgraded via Pack-a-Punch Machine it becomes the Xeno Matter 4000, gaining increased stats. 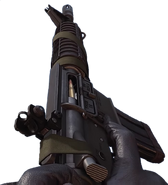 Inspecting the XM4 via weapon inspect.