"Semi-automatic sniper rifle. Deadly from the chest up, with moderate recoil."
— Description from Create-a-Class

The XPR-50 is unlocked for create-a-class after the completion of the level "Suffer With Me". However, it is also found in the level "Odysseus", where it can be used to provide sniper overwatch and complete a challenge. It's also the secondary weapon choice in Judgement Day.

It is the last sniper rifle to be unlocked in multiplayer at level 52.

The XPR-50's rate of fire is above average for the sniper rifle class. It fires semi automatically, with a firecap of 375 RPM. Firing faster than the firecap will further restrict the fire rate. This fire rate is good, especially for the XPR-50, which has damage almost equal to that of the Ballista, but while possessing a much higher rate of fire, therefore heavily increasing the damage per second.

The XPR-50's handling characteristics are quite poor. The aim down sight time is slow overall, at 400 milliseconds, while the XPR-50, like all other sniper rifles, have an extremely large hip-fire crosshair, making it at most a mediocre last resort option. The reload speed is poor overall, taking 3.5 seconds to reload a partially filled magazine, or 4.1 seconds to reload an empty magazine. The reload cancel speed is 2.45 seconds, which is quite unimpressive in the grand scheme, but isn't much different from other sniper rifles.

The XPR-50 has a large magazine capacity, holding eight rounds in each magazine, and since the player spawns in with three spare magazines to start, gives the player 32 rounds to start off with, with a maximum of 64 rounds between the gun and reserve ammo. This supply is only bested by the SVU-AS, which consumes ammunition at a much faster rate. The XPR-50 can make great use of each bullet, allowing the user to get a lot of kills without extra ammunition being collected.

The XPR-50 has the usual assortment of attachments at its disposal. The Suppressor prevents the player from appearing on the mini-map from shooting the XPR-50, but at the cost of not one-shotting the forearms. Since the XPR-50 is semi-automatic, it is not as reliant on one shot kills, but it is quite powerful regardless, making the Suppressor an interesting attachment to consider.

The Variable Zoom Scope gives the XPR-50 two zoom levels, one less zoom than the standard scope, the other with more zoom than the standard scope. This scope can help the user spot targets from further away, or have an easier time tracking targets up close. The Dual Band Scope creates a thermal overlay that will highlight enemies not using Cold-Blooded as bright orange, while Cold Blooded users are unaffected and do not have their color changed. The ACOG Scope grants view of the mini-map, peripheral vision, and a low zoom level relative to the XPR-50's other sight pictures. The ACOG Scope also doesn't restrict the user's ability to hold breath, but the prompt to do so will not appear on screen.

Fast Mag decreases the XPR-50's reload time, reducing the speeds to 2.36 seconds for a partially filled magazine, 2.56 seconds for an empty magazine, and a 1.45 second reload cancel speed. This reload speed is one of the fastest in its class. Extended Clip will increase the reload time by ten percent, but will increase the magazine capacity to eleven rounds, roughly a 38% increase, while increasing the starting ammo loadout to 44 rounds, and a maximum of 88 rounds between the gun and reserve magazines.

The Laser Sight will reduce the hip-fire spread significantly, while giving a protruding laser. It's mostly the latter effect that is most valuable on sniper rifles, since players who tend to quickscope may find that the Laser Sight gives a visual aid of where to aim.

FMJ will increase the XPR-50's penetration power even further. The XPR-50 will be able to tear through most pieces of cover without major repercussions, if not completely unhindered by the obstacle(s), as only the un-penetrable obstacles will stop the user completely. Considering the XPR-50 already has excellent penetration, however, FMJ is considered an overkill attachment that only helps in very specific scenarios.

The XPR-50 in first person.

Cocking (notice the cartridge in the chamber). 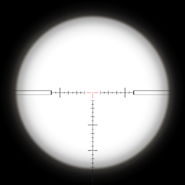 The XPR-50 as seen in the Black Ops II behind the scenes trailer.

The XPR-50 appears in Call of Duty: Strike Team. It is unlocked after buying the "Stealth Package" Care Package, which contains the perk "Sniper", which increases Sniper Rifle Damage, three Claymores, and the XPR-50. In addition, the XPR-50 is given by default a suppressor for silent kills.

XPR-50 in first person, as it appears in Call of Duty: Strike Team.

"Semi-auto .50 caliber sniper rifle. 1-shot kill to the center torso and above. Hold Left Stick/L3/Shift while ADS to steady."
— Description from Create-a-Class

The XPR-50 appears in Call of Duty: Black Ops III, obtained through Supply Drops. It was added on March 6, 2018, and it resembles its Black Ops II appearance.

The XPR-50 is a versatile sniper rifle, as it can kill in one shot to the chest with the ability to pull off follow-up shots because of its semi-automatic nature. However, while the recoil's kick is only moderate, it resets quite slowly, so being patient with subsequent shots is advised. The default scope is quite clear with a T-shaped reticle, which is adequate for long-range engagements, but optics with lower zoom are helpful for close and medium ranges.

The handling properties are average compared to other sniper rifles. Hipfire accuracy is poor, although rapid fire without aiming can be used as a last resort when caught off-guard in close quarters. Idle sway is moderate, so Ballistics CPU is helpful when using the default scope in making sure the first bullet hits the one-shot kill area. With a magazine size of eight and a fairly slow reload, coupled with the potentially rapid use of bullets, Fast Mags or Extended Mags are recommended. Suppressor is a decent choice, as it incurs no penalty to sniper rifles, and masks the very loud firing sound the XPR-50 emits.

The XPR-50 in first person

Aiming down the default scope 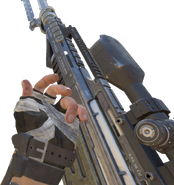 Picking up the weapon

8 rounds
(13 and 18 rounds with ammunition attachments)

The XPR-50 returns in Call of Duty: Mobile.

It has the second fastest fire rate of the sniper class, but does not have its one-shot kill potential from previous games if used without the Stopping Power attachment. On average it's a 2-shot kill at all ranges (3 through a wall). With Stopping Power, it gains the ability to one-shot kill, however the one-shot hit box is very small and is highly glitchy, therefore one-shot kills do not always happen on the XPR-50.

The XPR-50 features a high rate of fire but low damage, therefore it often loses fights against other sniper rifles such as the Arctic .50. It used to have the advantage of being one of the two sniper rifles that could use Light Trigger Mods (allowing it to fire in a slow full-auto fashion), but this mod got removed. It is available as Rare and Legendary blueprints (both of which were removed), and Uncommon blueprints in BR - Sniper Challenge.