Call of Duty Wiki
Register
Don't have an account?
Sign In
Advertisement
in: Articles to be expanded, Call of Duty: Black Ops III Assault Rifles

The XR-2 is a bullpup three-round burst assault rifle featured in Call of Duty: Black Ops III. It is one of the few burst-fire weapons that continuously bursts while holding down the trigger.

In "New World", it is the Player's starting weapon while being guided by Sebastian Diaz. Equipped with a Recon Sight and Suppressor. SPC Peter Maretti also wields an XR-2.

The most recent of the "Experimental Rifle" series, the XR-2 is a versatile rifle designed for the most dynamic of combat scenarios.

Utilizing the unique "double-hop" bolt carrier design perfected by Commander Winston M. Rowland in the XR-1 series, the XR-2 is capable of long-range power and precision in a compact, highly maneuverable frame.

The XR-2 omits full-auto and selective fire for a three-round burst trigger group, optimizing for precision shooting over pure volume of fire. Supporting a tremendous array of attachments and customizations, the XR-2 is an ideal choice for a highly adaptive gunfighter.

Because of its auto-burst nature, it is effective at all ranges, moreso at longer distances than other assault rifles because of the accuracy of its bursts and lack of major recoil.

In close quarters it remains useful, though not as effective as automatic weapons purely because of the burst fire - however it fares better than its burst-firing assault rifle counterpart, the M8A7, which does not auto-cycle its bursts.

The XR-2 in first person 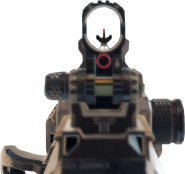 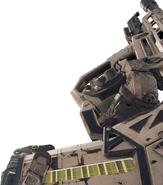