Call of Duty Wiki
Register
Don't have an account?
Sign In
Advertisement
in: Call of Duty: Black Ops III Characters

Xavier Hirtzel is a minor antagonist that appears in the level New World in Call of Duty: Black Ops III. He was a former Coalescence Corporation member who later joined an unnamed terrorist cell, which is referred as the "Cotardists" in Nightmares, in order to destroy a Coalescence commuter train inbound for the Coalescence Corporation HQ in Zurich, Switzerland on December 12th, 2054. The train was carrying the protoype for the Winslow Accord Neural Network Initiative, which was a type of artificial intelligence software that was capable of re-writing itself in order to interface with any other system in the world. Xavier hacked several Grunts in order to bring a bomb on board the train's cargo car, which successfully detonated. During the simulation with Hall, which recounted the ZSF's efforts to thwart the terrorist attack before it happened, he is caught and killed by the Player when they interface with Xavier's DNI, ultimately frying his brain.

The simulation he appeared in was based on reality, where he managed to escape successfully, meaning his actual death might have never occurred and he could still be alive. 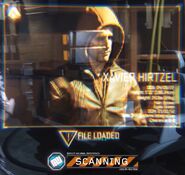