"Now go, before I shoot you myself!"
— Pavlov to Pvt. Kovalenko

Senior Sergeant Yakov Fedotovich Pavlov (Russian: Я́ков Федо́тович Па́влов) was a Russian soldier who fought to defend an apartment building, now named "Pavlov's House". In the game, his squad clears it out and holds it against German reinforcements for no more than twenty minutes.

Alexei Ivanovich Voronin was assigned to find Pavlov's squad. Taking the sewers, he met up with others and finally found the Sergeant lying in a ditch. Seeing Voronin as an effective replacement for his recently deceased counter-sniper, Pavlov uses Pvt. Kovalenko as bait to draw out snipers and has Voronin to pick them off. He threatened to shoot Kovalenko for insubordination after the latter complained about his task. When all the snipers were eliminated, bombers zeroed in on the squad's position, and Pavlov and the squad had to run across the field. His squad then eliminated the front defenses of the apartment, along with its current occupants, and secured the house.

But the battle was not over yet. Panzers were approaching the apartment, and that was bad news for Pavlov's men. Luckily, the Sergeant prepared for this and ordered Alexei to use the PTRS-41 anti-tank rifle. After receiving more friendly troops, a German counterattack began. It lasted four minutes, and by the time it was over, the house was teeming with corpses. Pavlov then stood alongside Russian reinforcements, who had come to relieve them. However it is possible for him to be killed, while holding off till reinforcements arrive. If the player looks at him his name can be yellow or red just like another soldier. 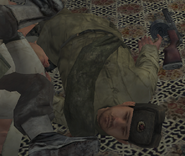 A dead Pavlov with his PPSh-41.
Add a photo to this gallery

Retrieved from "https://callofduty.fandom.com/wiki/Yakov_Pavlov?oldid=2488038"
Community content is available under CC-BY-SA unless otherwise noted.