"A child mathematical genius, Portnova worked in cryptography before being inducted into KGB Directorate V. Brilliant, deadly, and fanatically loyal to the state, she represents a threat either on or off the battlefield."
— In-game biography 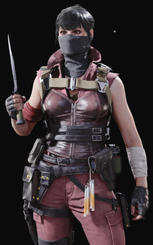 Portnova's "Shadow" Skin. Note that this outfit reuses assets from Scarlett Rhodes.
Add a photo to this gallery

Retrieved from "https://callofduty.fandom.com/wiki/Yirina_Portnova?oldid=2564814"
Community content is available under CC-BY-SA unless otherwise noted.