Call of Duty Wiki
Register
Don't have an account?
Sign In
Advertisement
in: Call of Duty: Black Ops Camouflages

Yukon is a type of weapon camouflage in Call of Duty: Black Ops.

Yukon is seen to give an arctic-like finish similar to Arctic Camouflage from Call of Duty: Modern Warfare 2. The camouflage is best used with Arctic Black Ops models as it almost completely matches their white uniforms in multiplayer. This combination makes it much more difficult for the enemy team to spot what weapons the player is carrying. 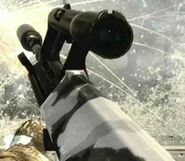 Yukon Camouflage as seen on the AUG in the campaign mission WMD.

Yukon Camouflage as seen on an M14 in the multiplayer map Summit.

The MP5K with Yukon Camouflage.