Call of Duty Wiki
Register
Don't have an account?
Sign In
Advertisement
in: Call of Duty: World at War Trucks

The ZIS-6 is a Soviet general purpose truck built for the Red Army. The ZIS-6's base was used for many different bodies, such as the Katyusha Rocket Launcher.

It is found only in the multiplayer map "Revolution" where it is a non-destructible static object. The trucks are apparently in use by the map's distillery and bear the distillery's logo as well as carrying boxes and crates of what is presumably vodka. 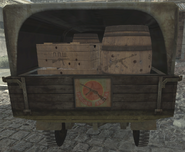