The ZPU is used by OpFor forces in the Middle East during the invasion of a small Middle Eastern nation under the control of Al-Asad. During the mission "The Bog", Paul Jackson is tasked with destroying a ZPU in order to allow AH-1 Cobra helicopters to come in and secure the area to rescue a stranded tank, War Pig.

It is most likely that tens of other ZPUs are firing throughout the mission "The Bog" and multiplayer map of the same name. They usually fill the night, firing at the skies above, though the player does not see much aircraft going about. In the mission "Shock and Awe", ZPUs will fire at Jackson while he is using the Mk 19. 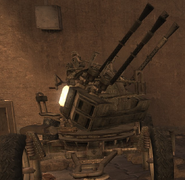 A model of the ZPU can be found in a glass display case in the "Museum" level.

The ZPU in Modern Warfare 2.

A ZPU in Afghan.

A model of the ZPU, found in "Museum"

In Call of Duty: Black Ops it appears in missions "Operation 40", "The Defector", "Payback", "Victor Charlie" and "Redemption". During Operation 40, Mason's team gets pinned down during their escape plane taxiing and Mason jumps from the plane to control the ZPU and destroy enemy vehicles. It can also be seen in the maps Havana and Jungle.

One of the many ZPUs found in Havana.

A ZPU in "Victor Charlie".

The ZPU makes an appearance in the level "Suffer With Me". A ZPU can be found on the roof of a red building, Northwest of the courtyard with a ruined structure in the centre, and can be taken down to complete a challenge.

The ZPU-4 appears in mission "Birds of Prey, where it has to be destroyed while the player is piloting the AH-64 Apache.

An unusable ZPU-4 is seen in the multiplayer map Nuketown.