Zetsubou No Shima/Ciphers and Scrap Papers

There are 12 ciphers and 2 scrap papers in Zetsubou No Shima.

This cipher is a predictive text. "+81" is the calling code for Japan.

"Of the 4 test subjects highlighted in Report 44, one of the brothers has died before we could reach him in the battle. The other is still at large in the city."

This cipher is written in Base64. It is followed by Entry 56 in Cipher #9 and takes place in Verrückt.

"Entry 58
We have been having power fluctuations for the past couple of days. Consequently, we have had to rely more and more on the backup generators. It's strange, ever since we have been having issues with the power, people are reporting hearing voices coming from the walls. They say they can hear quiet sobbing from a boy and a girl, as well as, a man shouting for children to close the windows. I have not heard the voices, but I admit something feels different about this place."

This cipher is a Vigenère cipher using the word "Ascension" as a key.

"My name is my name. My name? Oh, yes, it is Gersh. How long have l been floating? Minutes? Years? Where is now? I guess I can forgive Yuri. I quite like my new form. Hmmm, where am I now. A city on fire by a river. I know this place. Finally, I am home."

This cipher is a Vigenère cipher using the word "Mother" as a key.

"Comrade. I hope these schematics reach you in time so our scientists can make use of them, for I know the western front is on the brink of collapse. These schematics I have stolen from Group 935 will enable us to construct our own wonder weapons which will help us turn the tide of the war and give us victory over the German pigs. I fear, however, I will not live to see this. — V"

This cipher changes each letter with two digits but keeps the same order as the english alphabet where A = 01, B = 02, etc...

"Edward, as you know it is imperative you and the group find the exact versions of yourselves that I have highlighted in each universe. Only by killing that version of yourself in that particular universe at that particular moment in time will we be successful once each of you other selves are killed across all the universes. Remember, we are only immune because we opened the portal in France but I am afraid this might not be permanent. I fear there is something M isn't telling me and that there is not much time left for us."

This cipher is written in Hexadecimal

This cipher is a Keyed Caesar cipher using the alphabet key "Aurora Borealis" and a shift of 15.

"I shut down the power for the night. We must conserve the gasoline, so I am told, because the Emperor is in doubt of the usefulness of our research here at the Rising Sun facility, and that resupplying the facility will now occur every other month rather than our usually scheduled weekly drops. Hopefully, the new meteor site produces higher grade samples, ones we can actually use. Wait is that a plane I hear. The resupply is not scheduled for another week. I see a bright light in the sky...."

This cipher is a Columnar transposition cipher using columns of a length of 25 characters.

"Richtofen must understand that using these teleporters to jump between dimensions is both dangerous and imprecise. At any point, the fabric of space-time could collapse if the proper amounts of 115 are not maintained. I am also concerned about the unknown effects of trans-dimensional jumps. I have noticed even with my brief travels that new memories and emotions have flooded my mind, suddenly appearing from nowhere. I am also sure something is happening on a molecular level as well."

"Entry 56
Just finished a very long shift. We were awaiting the test subjects arrival from the castle but they never showed. Those Group 935 pigs didnt even bother to radio the asylum to let us know they were not coming. I am getting sick of those arrogant scientists. They have given the asylum the nickname Verrückt Asylum. I loathe it. We are as every bit as important to the completion of project as they are."

This cipher uses a crossword puzzle where A means "across" and D "down". The grid and the clues in Japanese can be found around the map.

"Urgent telegram. We have just received word that the private plane carrying the expedition crew encountered freak atmospheric event which caused it to crash, killing all on board including the famous explorers Brock and Gary. This comes weeks after their announcement about the location of Shangri-La."

This cipher is a Rail fence cipher. The cipher has 15 rows and an offset of 5.

"Division 9
Project D
Update to Group 935
The specimens have been manufactured to be asexual, we felt it was best to remove the primal urges of the sexes as this will make them far easier to control. That being said they are still extremely dangerous. You must have the mechanical control collars and proper frequencies set and applied when the specimens reach the juvenile stage after seeing what they are capable of your stalemate on the eastern front with the Russians will soon come to an end."

This cipher is a Vigenère cipher using "shinonuma" as key and the alphabet "AMUNOIHSZYXWVTRQPLKJGFEDCB" (Alphabet key "shinonuma" in reverse).

"While the loss of the Rising Sun facility was unfortunate, the Emperor was so impressed with our final results that he has approved the construction of the new Division 9 facility on the island we selected. He assured me personally that he will spare no expense in advancing our research. You and I both know that what we accomplish at this new facility will win the war for Japan."

There are 2 different scrap papers around Zetsubou No Shima. When formed, one can see 4 circles one and 4 squares on the other one.

When combined, the scrap papers create a cipher. This cipher uses prime numbers from 2 to 1031, letters and punctuation marks. For each character there are several prime numbers. To decipher it, one has to follow the prime numbers in increasing order.

"... Maxis, have you found the space-time coordinates for the other individuals I asked you for... It's imperative that we find them as well... You must trust me on this... For my plan to work, we need their blood." 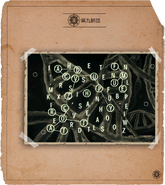 The two scrap papers combined to create the cipher.

Unlike all the other Zombies maps of Call of Duty: Black Ops III, Treyarch added a list with hints to solve some of the ciphers.