"Senegal born DGSE Mobility and Heavy Weapons specialist Zeyna has been a motorhead for as long as she can remember. Growing up around the garages of her rally driver father, she jokes that she has gasoline in her veins."
— In-game biography

Zeyna Ossou is an operator for the NATO faction featured in Call of Duty: Black Ops Cold War and Call of Duty: Warzone. Zeyna was released during Season One as part of the "Zeyna Operator Bundle".

Born on January 13, 1956, Zeyna grew up around vehicles and garages in her native Senegal thanks to her father being a successful rally driver. In 1974, Zeyna enlisted in the French Army where she joined the Engineering Arm and in 1978, she was recruited by the French intelligence agency, SDECE, later called DGSE. Zeyna took part in Operation Caban in 1979.[1]

Her extensive background made her a prime candidate for NATO's joint operations, including several conducted under the leadership of Russell Adler.

Zeyna accompanied Adler in Germany on January 20, 1984, after a CIA safehouse were attacked by Perseus forces led by Vikhor "Stitch" Kuzmin. Learning about an incoming attack on US soil involving Nova 6 gas, Adler assembled a team to infiltrate a mall in New Jersey. The team included Zeyna, Wyatt Jones and Frank Woods. They arrived the next day, on January 21, but were soon ambushed. As the team was overwhelmed, Adler was captured by Stitch. 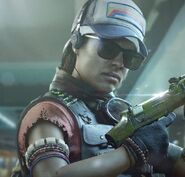 Zeyna as an operator in Multiplayer.