The ZiS-150 is a Soviet truck designed in 1947 as the main truck of the Red Army in Call of Duty: Black Ops.

The ZiS-150 first appears in the level "Operation 40" as the main truck used by the Cuban Tropas, first seen among the trucks in the convoy before reaching Castro's mansion, then, after killing Castro's double, appears a truck with a DShK, which is eventually destroyed by Carlos' men. After rappeling down the cliff, Carlos' troops are deployed by a ZiS.

In "Vorkuta", after the escape by motorbike, Reznov and Mason ambush a Gun Truck using as a platform the ZiS-5, which eventually gets ambushed by three GAZ-66.

There are also many ZiS-5s in the levels "Crash Site" and "Payback", which are carrying an 82mm mortar or a ZU-23. 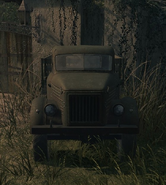 Add a photo to this gallery
Retrieved from "https://callofduty.fandom.com/wiki/ZiS-150?oldid=2562791"
Community content is available under CC-BY-SA unless otherwise noted.