There is a scrapped level in campaign called Zipline. The level would have likely been on several ziplines.

The zipline first appears in the Zombies map Shi No Numa. To be used, it has to be activated using a Control Panel outside of the Doctor's Quarters. Once activated, it goes to the Doctor's Quarters, where it costs 1500 points to ride up to the Warning Room of the main building. While moving, the zipline can kill zombies and down players. The Zipline offers a quick escape when the zombie horde becomes overwhelming. Players can use it to exit the doctors quarters or the second floor of the main building. Players should be careful if there are more than two on it since players might get pushed off. This is a great escape for anyone who needs it.

Ziplines are used several times in the campaign. In the level "Operation 40", Woods, Bowman, and Mason use a zipline to get into the courtyards ahead of them, so they can attempt to assassinate Castro. In the level "Executive Order", the Crossbow uses a special grappling hook, and is used to quickly rescue Weaver.

It is only included in only one multiplayer map, Kowloon. It has one small zipline and one big zipline, both connected to one building. Each zipline connects to the other team's spawn point and they can only be used from the higher point. The higher point is located in a building in the middle of the map, making it a highly contested area.

It should be noted that the player is very vulnerable to enemy fire, so the zipline should only be used when there are no enemies around.

The zipline returns in Shi No Numa exactly how it was in World at War.

The normal zipline appears in Call of the Dead. One of the ziplines appears at the top of the first ship, where the power switch is. Players can take it from the ship to the coast (spawn area). Zombies can also use it including George A. Romero, so it isn't as useful as its Shi No Numa counterpart. However the fact that it can be used at any time and doesn't cost any points could balance this out. Unlike Kowloon, the player can use their gun while on the zipline, without the ability to reload or aim down the sights. There is also a zipline running from the top of the lighthouse to the ship, but this is initially blocked. To unblock this zipline, one must unblock the path leading from the lighthouse to the ship by buying the boat. With this zipline, if the player just walks toward the zipline instead of jumping, they will not use the zipline, but instead fall all the way to the base of the lighthouse. This will down the player instantly unless he has PhD Flopper, or if he has full health with Juggernog. The zombies will all take the zipline, giving you a few seconds to prepare.

The zipline has no prompt on how to use it. Simply jump towards it to use it.

Ziplines appear in the mission "Federation Day". They are used to travel from the initial building to the building Victor Ramos landed in.

The Ghosts on the zipline.

The zipline disconnecting for rappelling down the building.

In "Fission", Gideon and Mitchell use a zipline from a helicopter in the nuclear plant. Enemies also use ziplines in the cave in the missions "Induction", "Crash" and "Armada".

The Zipline returns as a utility in the Call of Duty: Black Ops III Zombies map Zetsubou No Shima. It costs 250 Points to use, and only one player can use it at a time. It can be used to travel between lab A and the docks, from either area to the other.

It also returns in the remastered versions of Shi No Numa, and has the same function as it had in the previous two versions.

The Zipline also appears in the campaign mission In Darkness, where the player and Hendricks use it when they were approaching the Black Station. The player can choose to use one of two Ziplines, one headed for the right section of the street, and one headed to the left section.

Four ziplines can be found and used in the Call of Duty: Infinite Warfare Zombies map Rave in the Redwoods.

The Zipline returns in the Shi No Numa remake. 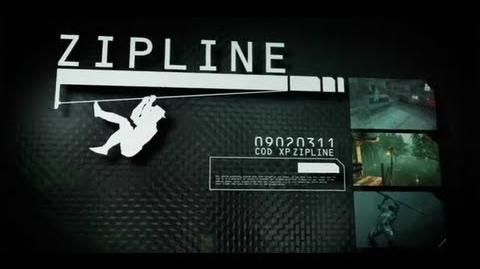