Call of Duty Wiki
Register
Don't have an account?
Sign In
Advertisement
in: Call of Duty: Black Ops Zombies Enemies

The Zombie Monkey is a Zombie enemy type seen exclusively in Shangri-La.

The monkeys stay perched on top of the sides of the stairs leading up to the Pack-a-Punch Machine. If one is killed, another will replace it. They have very low health, and can always be killed by a single hit from any weapon, even in higher rounds.

When a power-up is dropped, they will howl wildly and one will run towards it. If a player gets a power-up before a monkey gets it, the monkey will attack the player once, and then run away. If the monkey reaches the Power-up first, they will run to the top of the temple with the Power-Up on its back, cycling through the various Power-Ups while glowing red. If the Monkey is killed before it can escape, the Power-Up shown when it was killed is dropped and can be picked up, even if the power-up is dropped on stairs of the temple. If the Monkey escapes, the Power-Up is lost.

Monkeys can be extremely useful if the player is skilled, as useless Power-Ups which are not needed can be used to get Max Ammo or Fire Sale, or possibly even a Random Perk Bottle (which can only be obtained if the monkey steals a Max Ammo). Furthermore, early on the 500 points can be beneficial to opening up areas without proceeding too many rounds.

When a monkey steals a power-up, the power-up will turn from green to red, and will cycle through all power-ups featured on the map. Power-ups included in the monkeys' cycle usually but not always include: 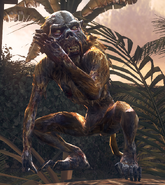 A close-up of a Zombie Monkey.

A Zombie Monkey, as seen in the Shangri-La trailer.

A Zombie Monkey perched on a temple in Shangri-La.