Call of Duty Wiki
Register
Don't have an account?
Sign In
Advertisement
in: Call of Duty: Infinite Warfare Zombies

Zombies is a game mode that is featured in Call of Duty: Infinite Warfare, and was initially planned for Call of Duty: Modern Warfare before being removed in favor of Special Ops. It is Infinity Ward's take on the highly popular mode. Zombies content is only considered canon in its own universe.

The mode brings numerous new features to Zombies as a whole, including Candy Perks, Fate and Fortune Cards, and new Wonder Weapons such as the Forge Freeze Gun.

Up to four players must survive endless waves of attacking zombies, earning Cash from killing or damaging zombies and repairing barriers. Cash can be used to purchase weapons and Candy Perks in the process, or unlock new areas and activate other special objects. In Zombies in Spaceland, Tickets can also be earned by the player for completing N31L's challenges, through pick-ups dropped by zombies or by playing certain games and attractions in the Arcade. They can be used to purchase special grenades, weapons and the Arcane Core. Zombies enter the player-accessible area of the map via windows, holes in walls, or emerging from the ground, which are initially barricaded but will be rapidly demolished, though players can barricade them again.There is no limit to the number of rounds (or 'Scenes'); the game will end when all players have been incapacitated or killed by the Zombies. Zombies become stronger, faster and more numerous upon the completion of each round, forcing players to make tactical decisions about cash spending and progressing through the map. On occasion, zombies will drop power-ups such as Max Ammo, Nuke, or Insta-Kill upon their death, assisting the player.

Infinite Warfare Zombies consists of five maps; Zombies in Spaceland, Rave in the Redwoods, Shaolin Shuffle, Attack of the Radioactive Thing, and The Beast From Beyond. Each map is set in a different time period and movie genre.

Infinite Warfare Zombies has a total of 9 playable characters:

Zombies also carries on the tradition of odd Easter Eggs within Call of Duty games. All maps have "major" easter eggs which, upon completion, grant the player an achievement/trophy in addition to an in-game reward, usually in the form of weapons or perks.

Similar to Black Ops III Zombies, the player will gain XP to rank up. Weapons levels can also be earned, which will unlock attachment slots for that weapon. Note that an upgraded weapon will still earn weapon XP.

Keys to buy Zombies Crates, effectively Supply Drops, can be earned by time played. Weapons unlocked by both are shared across multiplayer and Zombies, though usually with varying additional effects by always granting three random Fortune Cards with the third slot in the crate. Depending if the crate is a common or rare will depend on the amount of Fortune Cards the player receives.

"We’re trying to create an authentic, realistic feeling world. We don’t have the flexibility to do something like put zombies in the game."
— Jacob Minkoff, regarding Zombies

Zombies was initially planned for Call of Duty: Modern Warfare, but was scrapped in favor of Special Ops; the main factor being that Infinity Ward wanted to have a realistic co-op mode. Very little is known about the mode, besides a few lines of leftover code in the game's files and concept art. 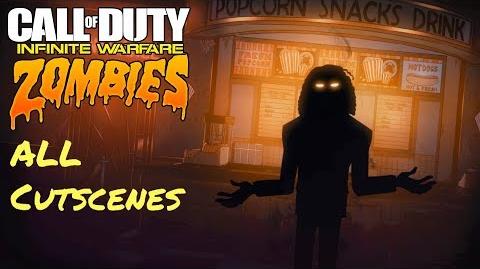