"Basic zombies have a chance to explode when killed, leaving behind a contamination field that slows enemies and increases damage dealt to them."
— Description

Zombshell is a Perk featured in Call of Duty: Black Ops 4 Zombies. It was added alongside the release of the map Ancient Evil with Patch 1.16.

Zombshell, when purchased, will allow players to have a chance to create a small contamination field when killing normal zombies. This field comes in the form of a small electrical orb, which will last for between five to ten seconds. When a zombie comes into contact with the field, they will be slowed down, and any damage they receive will be increased. Once the orb disappears, the perk will recharge before its effects can be activated again, with every activation of the orb effect causing the perk to take longer to recharge.

When Zombshell is set as the "Modifier" perk and the player has all of their other perks, the perk will allow players that have the perk as the modifier to be ignored by zombies while standing in the contamination field, similarly to the camouflage effect of Vulture Aid from Call of Duty: Black Ops II. 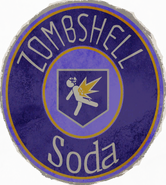